Here's my final model. Actually, this is the model that is final due to time constraints, because I'm leaving for Europe in a few days, and the SimplyMaya challenge this was for is finished on June 1st, so I won't be here to work on it. There's a ton more that I would have liked to do on it, including plenty of detailing, texturing, animating, and especially adding smoke and particle effects for the engines and stuff. I'm relatively satisfied with most of the model, so I hope you like the idea of it at least. 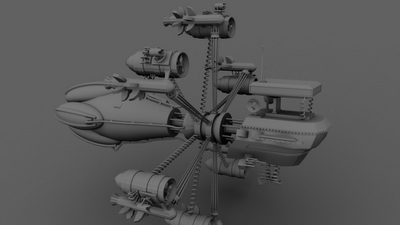 I will be posting hopefully more frequently once I get back from Europe (~early June).
Until then, there won't be anything new here.
Later,
Stuart
1 comment: