I finished the raptor modelling this afternoon, save for the bonus lessons that talked about sculpting in Zbrush. I don't have zbrush, so I haven't watched them yet, but I might do that later, just following along and seeing how much applies to Mudbox. 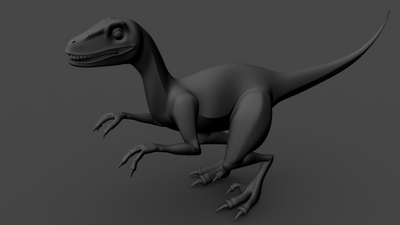 Next up is the UV mapping, a whole separate course, and then Texturing in Maya and Photoshop which is a third course. Looking forward to both of those. Hope you like the final image here.

Thanks for reading,
Stuart
2 comments:

Worked on the head. Mouth still needs to be done and some other details, but getting pretty close! One thing I don't like about doing video tutorials is that I can't listen to music while I work. That's an incentive to do original work, I suppose. 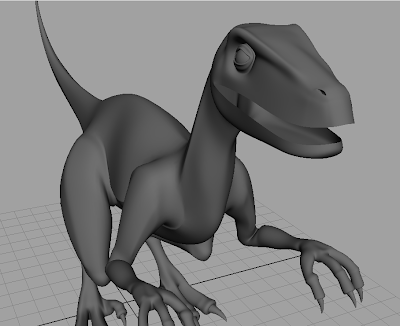 Used the snipping tool in Win 7 to grab the screenshot. For some reason I was still using Alt+PrintScrn all this time... how outdated. Apparently there's some function on the mac that you can press that'll pop an image onto your desktop, like FN + F11 + 1 + Option. I need to bind a hotkey to bring up the snipping tool. I wonder if there already is one. Let's see... apparently not, though I just stuck Ctrl+F12 onto it. Whee. No option for the windows key in the dialogue. Lame. Ramble grumble.

PS And apparently there's some Ugandans that have checked in! Welcome from across the globe! I do like my ClustrMaps. And welcome to the Russians and Americans too, always happy to have global visitors to my humble blog.
1 comment:

Got a bit further on the raptor, adding some definition to the arms, legs and body as well as just starting extruding parts of the head. Bit of an odd process so far with the head, but we'll see where it goes. 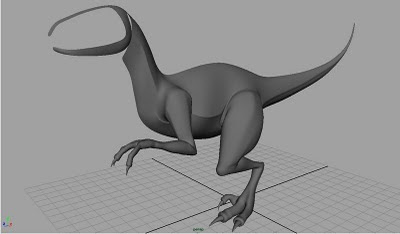 Had a fun class yesterday, making a collage over an old calendar landscape, adding elements that fit with the foreground, midground and background. Here's something you might not have thought about: typically things get lighter in value and less saturated, the further away they are. It's called aerial perspective, caused by particles/moisture in the air. Also learned how to do 3-point perspective, which was interesting, 2 points on the horizon and one point on a vertical line. Still don't know how to figure out where these vanishing points are in real life.

Got a good start on the velociraptor today. I think I like doing organic modelling, at least when there's good references and I have a good idea of how the body form is supposed to look. This is partly true for this project, but I can imagine getting OCD on muscle groups for projects of my own. 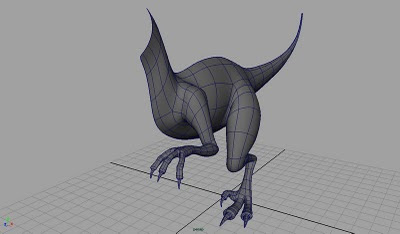 I remember back when I was playing around with Maya as a mild interest and I had a grand idea for making a dinosaur movie. I got a reference skeleton for a deinonychus, and began modelling. I think I spent about three hours on a single claw (which after all that I wasn't very happy with) and set that project aside. Good to see I can make a bit more progress with this now I that know some basic tools and techniques.

In other news, I spent some time with Daryl and worked out a pretty fun concept for the animation I'm planning on doing for genescreen. Won't spoil the idea yet, but I'll be sure to post updates on that as I get started. Still lots of concept work and pre-production to do. Even though I'd dearly love to just jump and start modelling, I know I'm going to have to do quite a lot of planning and some simple concept tests if this is going to work.

In yet other news, as March begins to come to a close, the book I was planning on reading, "This is Your Brain on Music" did not get read, but I did read a children's trilogy (in a loose sense of the word) by Lois Lowry, (i.e. The Giver, Gathering Blue, and Messenger); three stories of individuals discovering their respective purposes in a distopian society. Some interesting ideas, but I think I would have gotten into them more if I was younger (though I did read The Giver a couple times many years ago). And I've started "The English Patient" by Michael Ondaatje (sp?) for my March/April book. I enjoyed "In the Skin of Lion" by him, the 'prequel' (in a loose sense of the word) to this one.

It was pointed out to me that posts are better with pictures, so I'm going to try hard to include something with my posts from now on. Thanks for looking and reading!

Hope you had a good weekend,
Stuart
No comments:

Raptors and DNA (but not Jurrasic Park)

I've decided on the next project I'm going to do. It'll involve three different DT training kits, but they all use the same subject, a velociraptor. It'll go through some organic modelling, UV mapping, and texturing. I haven't done much organic modelling yet (other than delgo...) so should be informative, and I know very little about UV mapping, especially organic stuff, and texturing in photoshop using UV snapshots is a new technique to me as well. Should be fun. I'll post something as soon as I start (well, as soon as I've got something that is).

I've also gone through a couple smaller courses recently (Color theory, principles of graphic design) which complemented the class I'm taking right now nicely. And I finally finished up Intro to Rigging which was teeedious to get through. The Character Setup course was much more informative and easy to follow. So that's where I'm at right now. I'm sure by the time I finish this velociraptor, I'll be wanting to do something of my own that's original.


Luckily there's a video competition that's about to start that is right up my alley. Genescreenbc.com has a video competition that combines video (go figure) and genetics! So I'm really going to try to put something together for that. Kudos to one of my co-workers for pointing it out to me! And here's a question for you... what elements would you like to see in a nifty animated science video?

Email ThisBlogThis!Share to TwitterShare to FacebookShare to Pinterest
Tags: Velociraptor

So I didn't realize that this blog was a year old yet... but apparently I posted first on Feb 26th last year. Happy belated birthday to this anyway. I suppose I've learned a whole ton this year. Feel free to go back through the archive and see how hopeless I was back then... and then see how hopeless I am now. I just finished Intro to Modelling? Really? The road ahead is longer than the one behind.

So thanks again to the people that view this blog! Really keeps me moving forward. Oh, and feel free to comment on what your favorite post of the last year was!

Email ThisBlogThis!Share to TwitterShare to FacebookShare to Pinterest
Tags: Milestone

I finally got around to doing the DT course Intro to Modelling. Yes I've already been introduced to modelling (several times) but I learned several new tools and techniques, and even braved SubDiv surfaces which are still kind of annoying, to me anyway. The project was a swiss army knife, using polygons for things like the saw and the can opener, nurbs for things like the magnifying glass and the keychain part, subdivs for things like the scissors and what everything got converted to anyway. This is a quick render with a color and occlusion pass composited together (I love those occlusion renders). 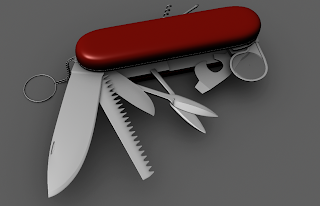 There's some aliasing going on it seems (at least in photoshop) but this won't go in my portfolio, so I'll move on. There's also a funky dot in the middle of the magnifying glass, some artifact from the NURBS sphere. I'll pretend it's a bit of dust. There was supposed to be a logo on it, but a) it was a DT logo, not the real swiss one and b) I accidentally broke the connection to it and didn't notice until I finished compositing it together. Let me know what you think.

PS I do have a swiss army knife (from Switzerland!) but it only has a small knife, a nail file and some scissors. I wish I had this one.
3 comments:

Email ThisBlogThis!Share to TwitterShare to FacebookShare to Pinterest
Tags: Modelling

Finally! A new maya project that resulted in an image to share :)
This was a short DT tutorial on NURBS (non-uniform rational B-splines, in case you were wondering) and although the tutorial instructor didn't get into too much detail on why to do certain things which was too bad, I did learn quite a few different tools for working with NURBS. The end result is a relatively decent looking skateboard rendered with a quick occlusion pass. Hope you like it. 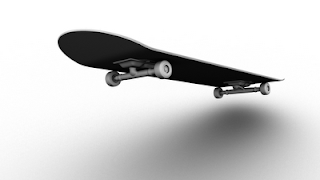 My lynda.com free trial subscription is over tomorrow or the next day, and I did zoom through about half the essential training on After Effects. I didn't get to Premier, which I wanted to do, so I might consider getting a month worth to round off my CS4 training. But first I need to justify my DT subscription, so I'm going to try to crash through a few shorter courses and then get back to working on a maya project of my own. Something that I hope to spend some time on and be able to put in a portfolio. I think I know what it will be, so stay tuned for that.

And I should say, thanks to all those that read my blog and comment and stuff, cause this blog keeps me on track (mostly) with my various attempts at Maya and other software. Otherwise I'd probably just be watching a season of Big Bang Theory or something like that...

Email ThisBlogThis!Share to TwitterShare to FacebookShare to Pinterest
Tags: Modelling

Hello everyone,
Sorry I haven't posted in a while, I've been working on photoshop tutorials for the past while and haven't produced anything worthwhile posting at this point. I have been learning a lot of cool things like how to use layer masks properly, adjustment layers, interactive brush sizing and softening, openGL canvas rotation (spiffy!), automation with actions. I've mostly been getting ideas of what is possible and how to approach certain things. I would like more of a foundation in digital painting, as opposed to the photo-editing that the tutorials focus on, but both are useful. I just have to do a couple more chapters of it and I will have a certificate of completion! I can put it on my resumé! Probably not.

Then on to the Premier tutorials. I hope to get that and the After Effects Essential Training finished by the tenth. That's my goal. (The 10th is when my lynda.com free subscription runs out). There's always a pressure to be continually viewing tutorials when you have subscriptions. Pros and cons to that I guess. Well, enough rambling from me, next time we'll see if I can post something I've worked on.