This is the first post in quite a long time that's not related to my master's research project (well it is, kinda), but I felt like I had to share this, because it resolves a pretty long standing issue that has bothered me. Hopefully it is of use to a couple other people as well.

Rendering a luminance depth (or z-depth) layer in mental ray so that it respects smooth mesh preview:

There are a number of ways to get a depth pass out of maya that I won't get into. I much prefer to use a separate render layer because it is so fast to (re-)render and you have much more control over the details, than if you use a render pass on a beauty layer. But the problem with using the luminance depth preset on a render layer is that it forces you to use Maya software, which doesn't respect smooth mesh preview, so your depth pass doesn't line up with your other passes (I'm referring to layers and passes interchangeably here). And if you switch to mental ray, the pre-built shader setup doesn't work when you batch render.

So, here is the shading network that will give you the exact same information as the luminance depth preset, but in mental ray.

1) Create each of these nodes and link them as follows:

2) It doesn't look like it in the thumbnail, but the ramp should look like this (white on bottom, black on top) 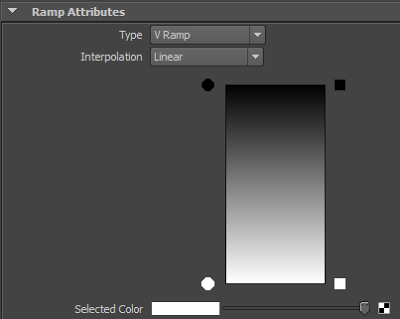 3) And the final things are to change the Max value in the setRange to 1 (I think this might have been missed in the original thread). And change the Old min and Old max to the range you want the transition to be over. Use the distance tool to check the distance you want. You can key this as well, but it might be easier to do that in post, depending on the scene.
Update (28/08/2014): I have noticed that in some instances large world distance values don't work. Instead I have to divide the values by 10 or 100 to get a proper range. I suspect this has something to with camera coordinate space, which is what the samplerInfo is using, but I don't really understand it. Comments are welcome on this point.

4) And the actually real final thing is to put all your geo into a new render layer and give it a material override with this new surface shader.

And this is the difference between maya software and mental ray. 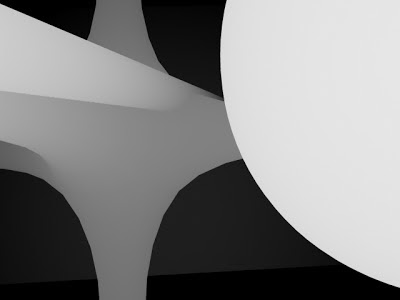 There is still faceting in the mental ray, but in that case you have the control, instead of being limited to maya software render. Let me know in the comments if it works for you, or if I've missed something.

And my render is done, so I'll jump back to maya now.

PS Okay, one last tip I'm experimenting with. nHair doesn't seem to work with this custom surface shader (there might be a way). The hair I want to be in the depth pass is darkish grey, so I've just added a directional light and increased the intensity until the hair renders at about the value I want. Nothing else is affected of course. Not super precise, but better than not including the hair in the depth pass. We'll see how it turns out.
5 comments:

A couple more rendered stills. I've got the mouse all behaving and rendered and I'm fairly pleased with it. I wasn't sure how the "glass" idea would actually work with a fully animated mouse. I did have to do some animation tweaks and re-rendering to fix some strange refractive issues, but overall I think it is successful. You'll have to wait to see the animated version for your verdict, but here's a frame (with some motion blur) of some grooming. 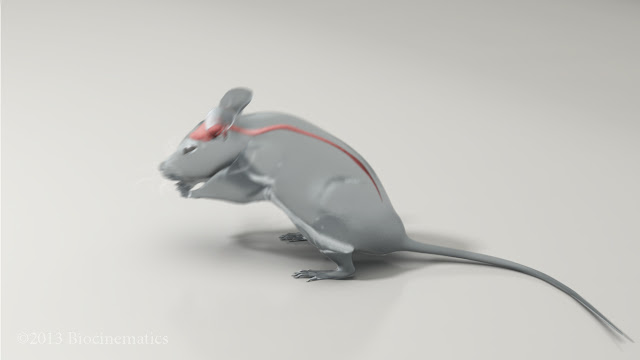 And I've composited the microscope with some closeups showing the action in the scene. 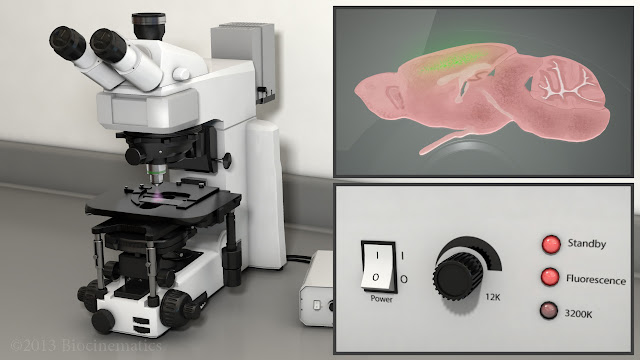 Finally, I'm blocking out another shot that's ultimately going to have lots and lots of neurons. These are just some pyramidal cells so far. (Neuron Builder v0.91 worked pretty nicely for this). 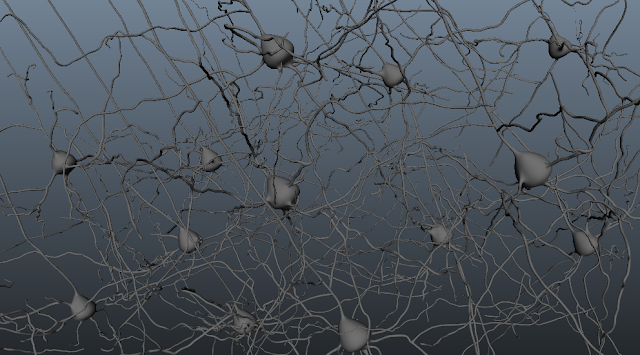 I've currently got several shots in various stages of the pipeline, so this week I'm really hoping to tidy up loose ends and get production really focused. May is coming to a close and so I've got just about a month and a bit left in production.

Email ThisBlogThis!Share to TwitterShare to FacebookShare to Pinterest
Tags: RtIN

Here's a render from the shot featuring the microscope. It is emitting light that will excite GFP in neurons in a thin slice of brain tissue. I still need to do some compositing on this shot, but it's pretty close to done. 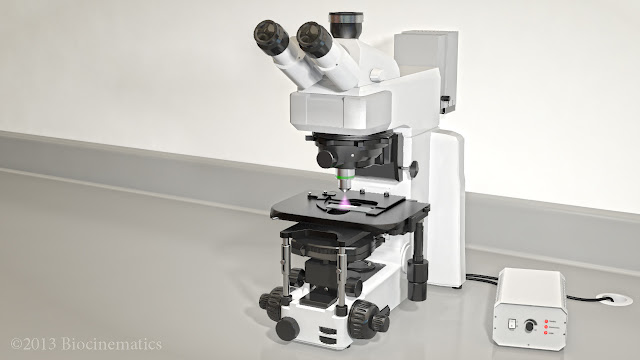 I'm also currently rendering out my animated mouse. Here's a playblast of him moving around:

Email ThisBlogThis!Share to TwitterShare to FacebookShare to Pinterest
Tags: RtIN

For one of the shots I've doing this week, a thin slice of a mouse's brain will be examined under a microscope. This is one of if not the most complex model I'll be creating for my animation. I fortunately was able to find some great vector references for a Zeiss model (vector is the best when it comes to technical reference images). I modelled this over the past 2 days or so. I'm still experimenting with the best ways to present models. Something like this takes a bit of time to setup, render, and composite, but it looks a lot nicer than screenshots. 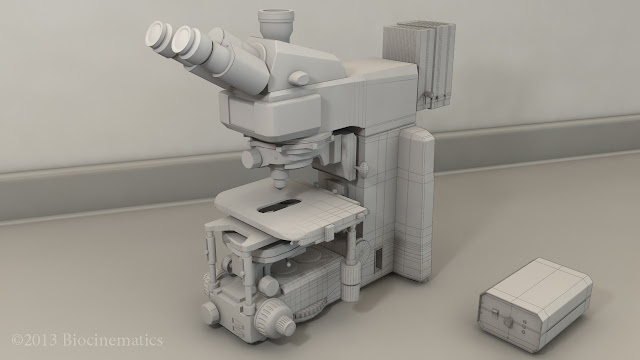 Still working away at shots and simulator functionality. I've got three shots in the middle of the rendering phase. Unfortunately mental ray is giving me some trouble on a couple of them, so just working out kinks there. Meanwhile animating my mouse intro shot:

And the simulator is starting to come together as well: 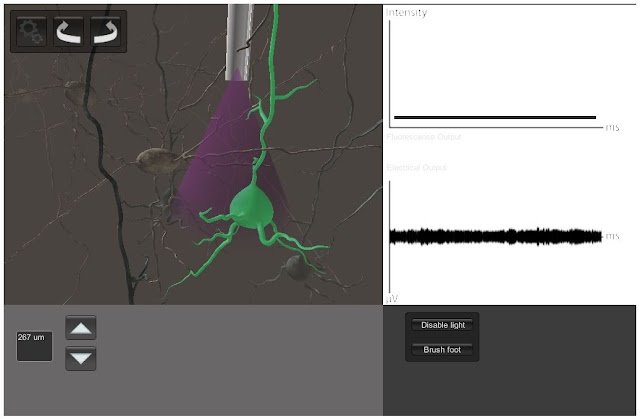 PS Apologies for the low quality jpegs. I just do that so my actual renders look a bit nicer in comparison. No, not really.
No comments: