I'm pleased to present my final image for the Simply Maya "Egg Photography" challenge. I had a ton of fun with this one and learned quite a bit about texturing and lighting. 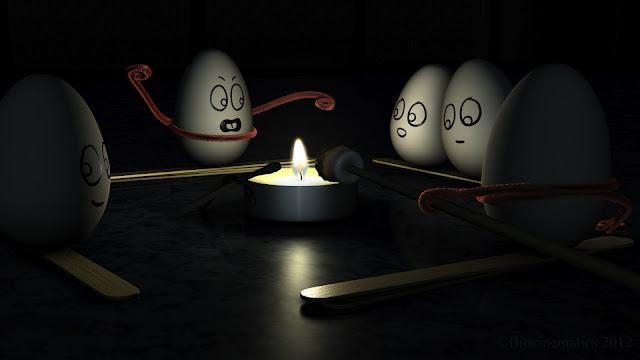 I wanted to make something simple but fun and interesting. The brief was to create in CG the kind of scene that people sometimes make where they draw on eggs and pose them in frying pans etc. to create funny images. You can google "egg photography" if you don't know what I mean. I tried to picture what people would be doing around a campfire if someone took a photograph, and translate that into egg world. So, I have a tealight with matches, a mini marshmallow on a chopstick, and of course eggs with pipecleaner arms sitting on popsicle sticks.

The modelling was quite simple, since I wanted to spend more time on the texturing. I used bump maps, displacement maps, specular maps, subsurface scattering materials, fur, along with a couple textures from cgtextures.com. I used point, spot, and directional lights, light linking, fur shadowing, ambient occlusion, and shader glow (boo). The egg faces were made in illustrator, and I did a few tweaks in PS after rendering. I mentioned those things in case you have questions about how I tried to achieve something, so shoot me emails or message Biocinematics on facebook. And to show that a deceptively simple scene can have a lot going on that I needed to learn about.

This is a full 1080p render, so if you want to download it and use it, e.g. as a desktop image, go right ahead. If you do want to use it for personal enjoyment and the faint watermark bothers you, just shoot me an email and I'll give you a watermarkless version as long as I know you won't post it online or share it or sell it. I know it seems silly, but I am proud of this one and want people to be able to find my other stuff if the image gets around.

Back to school on Tuesday! Whoo!

Just a few more days before the "egg photography" challenge deadline. I've textured everything in the small scene, and am just about to embark on the challenging issue of lighting. I really wanted to focus on lighting for this challenge, although I have learned lots about texturing and some different shaders, so that was great. 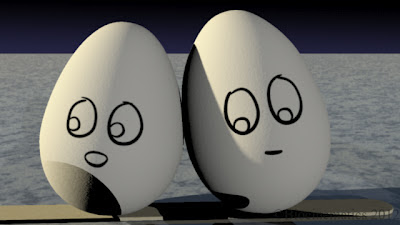 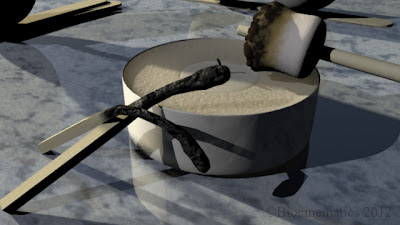 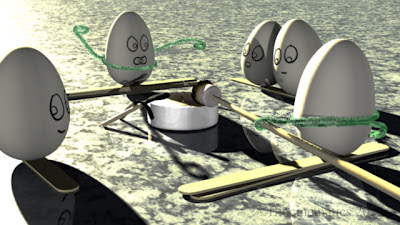 Hopefully I get the final image that I have in my head. So far I'm pleased. Fingers crossed :)

This is a stop motion animation my younger brother did a couple years ago. It's pretty cool, so I convinced him to upload it to vimeo so other people can see it. Be sure to check it out and share it with anyone you think would like it.

That represents a lot of hours. I haven't done any stop motion that ambitious before.

My egg challenge is approaching a conclusion, so I'll post some WIP shots hopefully tomorrow.

I've been on vacation for a couple weeks, which was really nice to get away. I posted a couple things on my facebook page without updates here, so for those that are without facebook (keep holding out!), I'll share them here too.

Update on the egg kitchen photography challenge. The deadline is Aug 31 I think. 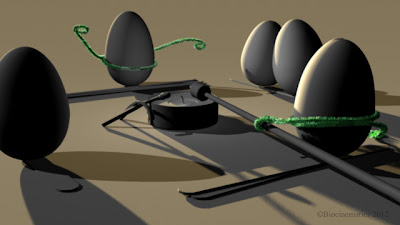 A couple shots of the tank in progress: 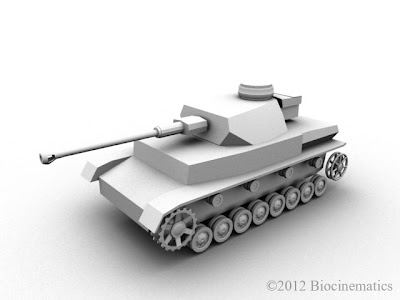 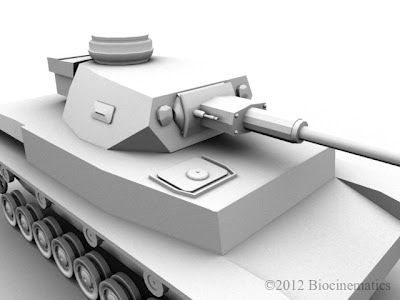