The render should be on youtube soon.
Hope you enjoy it in its raw form.

Edit: The final render is underway. Should finish and have it uploaded tomorrow night. Here's one frame of it. 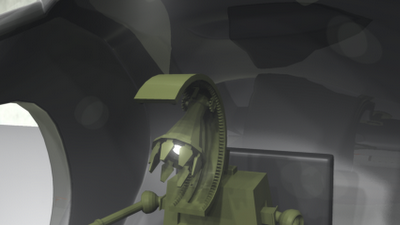 This animation is pushing buttons

Few screenshots of the animation process. I've done about 20 seconds or so of rough animation. I'll finish up the animation covering the storyboards I did, probably about 30-40 seconds total, and then do the fine tweaking of the animation, adding some more subtle movements. Only a couple days left! 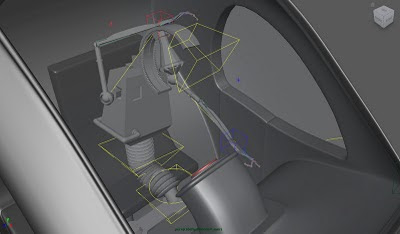 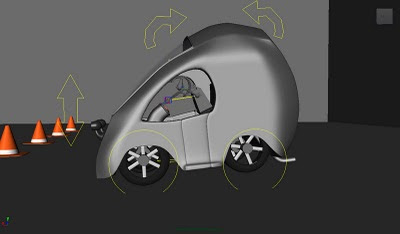 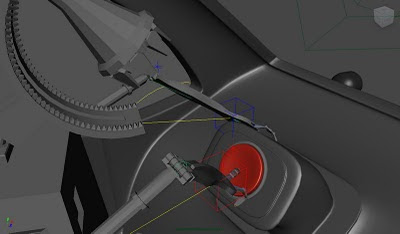 Email ThisBlogThis!Share to TwitterShare to FacebookShare to Pinterest
Tags: CrashControl

One of the things I love about Maya is how customizable it is. For example, I was getting annoyed by how time consuming it is to look in the menus for a bunch of different windows and editors to do stuff. So I made a marking menu that, at the push of a button (and a click of the mouse), pops up with 8 of the windows and editors that I want to open up frequently. I can add more to the marking menu if, say, I want to specify the hypergraph: heieracrchychacy (can't spell hierarchy) or hypergraph:connections. The hypergraph is another cool foundation of maya, but I won't get into that. 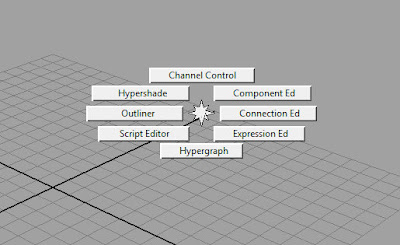 I haven't done too much since the last post but I think I've finished all the rigging and character setup I'll need to do. All that remains before I actually start keyframing is to throw everything into the same scene and make sure they're all the right size. Look for another update soon... otherwise I'll be really tight for time. This battle is going to end when January does. I'll post links to both the youtube videos once it's all finished.

This robot has a skeleton

Pretty much done rigging the robot; now I gots till the end of January to animate, texture, light, and render (and maybe sound?). Fun stuff! 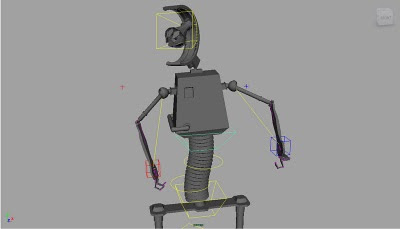 Listening to Said The Whale! 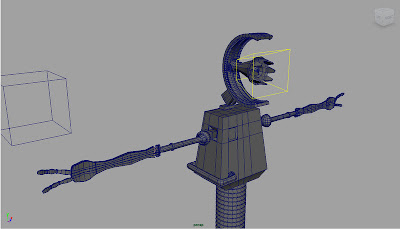 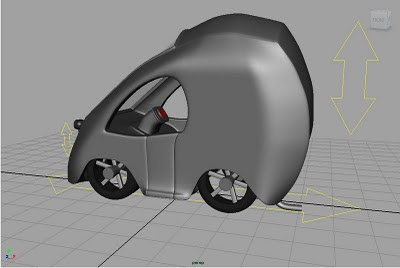 Rigged vehicle. Not much to see. Will have a robot guy rigged soon.
Later,
Stuart
No comments:

Email ThisBlogThis!Share to TwitterShare to FacebookShare to Pinterest
Tags: CrashControl

Words and no pictures again

So I didn't really accomplish my goals for last week and the weekend, but didn't miss by much. I call it a success. I completed the rigging training kit, did 3 sketches, and finished all the storyboarding for my animation.
This week so far I've done another sketch and almost finished a training kit on animation which has been very informative so far. It should really help with my short animation once I get to that stage. I've decided I'm quite stuck with the modelling. I have no real idea of where I want the character to go, visually, and I seem to be bad at modelling hard surface stuff out of my head. For the future, I'll definitely put the time into sketching out 4 or 5 reference images for a character of this kind. Lesson learned. I think it's time to just do the rigging and get busy with the animation, regardless of how silly the character looks.

Sorry I don't have anything to show right now. I haven't bothered to bring my sketchbook into work to use the printer scanner here... maybe I should get one for my own. I need a bigger desk. It's hard enough trying to squeeze a little tablet in between my keyboard and mouse.

Anyway, I've been reading "In silico: Animation and simulation of cell biology with maya and mel" alongside "Around the World in 80 days". Right now it's just going through the basics of the maya interface, most of which I know already, but hopefully soon I'll get to jump into some biologically based projects, like simulating actin filament growth. If you've seen "Inner Life of the Cell" by Biovisions at Harvard and XVIVO, you'll know what I'm talking about.

I won't post again until I have a screenshot at least.

Little update on my goals... almost there...
1) Did 2 sketches so far, a pointilism "sketch" of a transmission electron micrograph (influenza) and a real sketch of a tree frog
2) Almost done a whole course on rigging (not the vehicle one I was going to do because that's more advanced and I needed to get some of the rigging basics first) 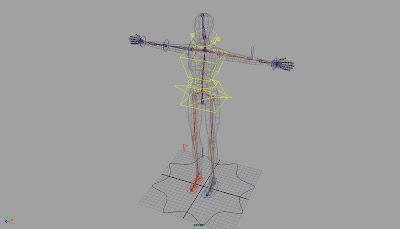 3) Still haven't touched my short animation in maya, but the storyboarding is done for that. It was good to get concrete storyboards to look at and plan around. Maybe that counts as the 3rd sketch :)
No comments:

Yesterday I went and did something slightly foolish but long desired. I bought Adobe Production Premium CS4 with my christmas money. Student edition, so it cost a fraction of the regular cost, but that's not what was foolish. Now I have:
Premier Pro (video editing) **was deeply in need of this one**
After Effects (compositing and effects) **was really excited to get this one**
Photoshop (you know what that is) **Gimp is functional as far as it goes... but PS is something of a standard**
Flash (2D vector animation and scripting) **I remember doing flash in high school. I wonder if I remember any of the tools**
Illustrator (vector graphics) **yay... later.**
Encore (DVD and Blu-ray authoring) **yay... I wish I had a blu-ray burner**
Soundbooth (sound editing) **yay... I can't find my microphone**
Pixel Bender (some photoshop plugin) **no idea**
Mocha for AE (motion tracking) **sweet... maybe later**
Bridge, media encoder, version cue, device central, drive... (little apps for various connections and communications) **sigh, time to put my organization to the test**
So this isn't to brag about my purchase (though I've wanted all this software for about 3-4 years or more) but I have to LEARN all of it now. And I'm supposed to be doing Maya (my own project and learning tutorials) and sketching and doing stop motion and traditional animation etc etc etc.

So feeling a bit overwhelmed but not regretting my purchase. Except... CS5 will be out soon. But that's a moot point. New software will be out soon regardless of the purchase date. Right? Right.

So what to do. I think there's so much tons of hours of loads of information and learning that are available to me now that I don't really know what to do first when. Oh yeah, with the CS4 bundle, I got the option of 30 days free lynda.com subscription which is really nice. And I'm not going to start it yet. But that will be good for photoshop and soundbooth and premier and some of the others which aren't covered that well (or at all) by digital tutors. I'll pick a 30 day period and rage through all the essential training I can. Rage might actually be the right word.

Ok, ok, short term goals here.
1) Go through rigging vehicle course (to be done by the end of the week)
2) Complete modelling and rigging crash short by end of weekend
3) Do at least three sketches (on paper!) by end of weekend

PS Book update. I did finish Brave New World in December. Quite enjoyed, but a bit odd. Didn't understand many of the subtle societal themes and implications. Understood that a lot of the book had sexual overtones (undertones?) and that the creator of the assembly line replaced **SPOILER** God **END OF SPOILER**.

My book for January is Around the World in 80 Days by Jules Verne. Loved 20,000 Leagues, and I'm enjoying this one so far.
No comments:

Still working on my short short thing. Haven't done that much over the holidays, mostly spending time with family. I've decided to settle on something a little less ambitious, but hopefully still fun and interesting. Here's the setting for it, instead of a whole city... yeah. 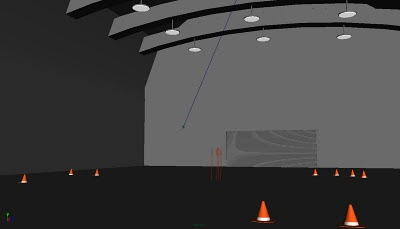 Once the holidays are done I'm hoping to get a lot of time in Maya and some other formats.

Speaking of which, for christmas I got two books, one Keys to Drawing with Imagination, which has lots of interesting ideas and principles for creative drawing, the second is The Animator's Survival Kit, which I've heard is one of, if not the, greatest book on traditional animation. So I've started in on those books and have been doing a bit of doodling and sketching (on real paper!!!).