Ok, so here's another shot, just as I'm trying out different things. I was able to grab the entire workspace with tools and all. I also added a copyright notice so you can't steal my fine fine work. ;)
I'm not sure yet whether the image quality is any good, but I'll tweak some settings as I continue to blog along. (visual rhyming?)
This is delgo's hand, which I'm about to start working on, and you can see the leg and foot with some detail (two toes, baby! Apparently the Lochni haven't heard of polydactyly).

PS Comments and crits are always welcome... this is a learning deal after all.
2 comments:

Ok, so I'm still working on the best way to post screenshots and stuff, cause I'm new to this obviously. I just downloaded picasa and it seems to work pretty well cause it has built in integration with blogger, both being google things. 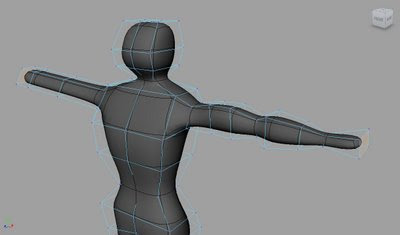 Anyways, this is my attempt at a screenshot, we'll have to see how it turns out on the blog.

The book I have that is trying to teach me to be a modeller/animator is using characters and scenes from a movie called Delgo as tutorial subjects. You may have seen the trailer (or even the movie, yikes) and thought, boy that looks lame. It looks like the kind of movie that was based on a project designed to teach people how to model and animate, but shouldn't have tried to make money. Ten years ago a movie could maybe stand up purely on it's effects and CG status. Not anymore. But if you'll notice my subtle point made a couple sentence fragments ago, the subject matter actually serves as a teaching tool pretty well. All this to say that the weird gray hominid figure above is Delgo. That's right, one of the Lochni is being created before your awed eyes.

So, about the modelling process... I was kind of hoping that my screen shot would include the user interface and buttons and tools and all that, but I just got the viewport (fancy term for the part of the screen that you work in). I'll try to fix that for some future shots, but the important stuff is there. If you're really bored, by the way, just close your tab and come back in a few weeks. Maybe there will be something interesting happening then. So far, I've blocked out the main figure, and now I'm adding some more detailing in the arm (and hidden leg) region. Because at the end of the process I'll just be mirroring the right (left if you're delgo) half of the figure to the left (right if you're delgo, yeah, ok I'll stop) I only need to really work on the right (left if...) side which is why the right (l...sorry) is more detailed and the left (..) looks like he got his right (ha, tricked you there) arm stuck in a plasticine-noodle-maker.

So that's about all I should probably say about this at this point, but come back soon and I maybe will have progressed with the progress process.
Later,
Stuart

PS I could do this sort of work-in-progress (WIP for geeks) thing on a forum like simplymaya.com, but I'm hoping that my readers won't know much about modelling and will be impressed (suckers) with my feeble attempts.

One of my interests of late (actually since Toy Story came out...) is computer animation. I started getting into it myself in high school when a friend of mine introduced me to anim8or, a free 3D modelling and animation program. I don't really have anything stellar to show for that time period, although I did model a lot of people, places and things (mostly things), because I never really got the hang of the animation part of it. Partly I think that was a failing on the software side of things, but let's not play the blame game. Then I stumbled across something called Maya (actually another friend introduced it to me I think), which, if you know anything about the video game, movie, and/or visual effects industry, is a leading player in the aforementioned industries (well, it's still a leader even if you don't know anything about aforementioned aforementioned industries). They've got (or used to have... #$%^&^&%^&% don't get me started) a personal learning edition which allows you to do basically everything with the software except end up with a usable product (commercial usage restrictions). That was really cool, and it's an incredibly deep and complex program. I fiddled around with it for a couple years and then stopped using it because I didn't really have a structured learning resource and I didn't think it would lead anywhere much.

Yay, Maya! I got a training book for my birthday, and I recently downloaded a 30 day trial version of Maya Unlimited (look it up, super cool) which let's me actually render usable images and animations. Thus, I have been starting the long process of trying to get a handle on this behemoth of a software package, and I'm hoping to share the mostly embarrassing and hopefully somewhat inspiring and satisfying results of this momentous journey (layer on the cheese please) with my faithful readers... you!

Ok, now you may have an inkling (a baby writing liquid) of an idea of what this blog will be about, so I'll leave it there, notably without any screenshots or renders yet (give me time).

Until the next time that I write in this text box and hit post, or until you scroll up or down because you've jumped on the bandwagon late, you behind-the-times you...

OK, so I've got a new blog! Yay... I was trying to create a blog on my own website (www.biocinematics.com -don't bother going there, there's nothing there), but apparently they don't have the capacity to host one, or I and a fellow computer genius are unable to figure out what's wrong with their poorly designed system. Anyway, what's this all about? Well... not a whole lot yet, but I have big plans which are yet to be disclosed.
(That part is a hook so you'll keep coming back)

I think that's enough completely useless and uninformative information for a first post, so I'll leave you hanging there. Feel free to post comments anyway, because I still have to figure all that UI stuff out and how to delete your comments when I don't like them, etc.