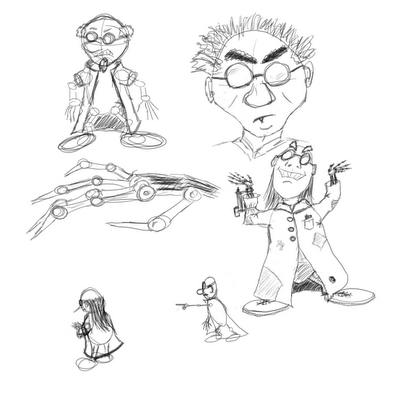 Here's some little sketches I did this evening for Dr. Mel Ishis. I haven't really used my tablet in a long time, so it was kinda fun to play around with sketching. I'm not really a very good artist, so apologies for the not really very good sketches, but it's at least a start to the project.
C & C welcome of course.

Updates to the character as I drew some stuff:
Dr. Ishis cut off his hands (one by one) and replaced them with robotic mechanisms for the increased precision and strength necessary to build a weapon of mass destruction (the style for the hand was kind of inspired by the Coraline super villain mom lady).
Through years of neglect, the evil doctor's lab coat has become torn, stained, patched, and burnt by sharp objects, chemicals, sewing machines, and bunsen burners, respectively.
No comments:

Well, I'm back in Victoria finally and looking forward to getting back into Maya.
There's a new challenge over at simply maya which I have entered. I'm going to be just starting some concept sketches for an evil scientist type.
Here's the little back-story I made up for him:

Having been mocked about his stature for years by his taller coworkers, the diminutive but brilliant Dr. Mel Ishis PhD. has finally turned on the Institute for Scientific Discoveries and Academic Thought for the Origins of Kinetics (I.S.D.A.T.O.K.) and its population of narrow-minded and petty scientists along with the whole planet by extension (and further pettiness). Using his background in kinetics, Dr. Mel Ishis has drawn up plans for an intelligent weapon with the capacity to destroy life as we know it (leaving, incidentally, the millions of uncharacterized organisms on earth virtually unscathed). Unbeknownst to all, in his aboveground lair, the evil doctor tinkers away with tungsten, neon, stainless steel, animal tissue, and used television sets. Finally, he steps back in awe (and so that he can see more than just the bottom of it). He has done it at last. Dr. Mel Ishis has determined the fate of our race; he has created...

...well I'm not sure exactly what yet, so I'll leave you hanging there. It'll be sort of cartoony, and I'll definitely post some WIP pics as I go.
Later,
Stuart
No comments: