Alright, so this'll probably be the last post for a while. I'm still doing some tutorials until the end of october, but once halloween's over, I'ma gonna write me some book! (Yes, the quality of that sentence will likely be indicative of the overall novel).

I'll try to embed a little widget here so you can see my progress too... It'll be good to be kept accountable so you can cheer me on when I hit a rough patch. Or it might be terrifically embarrassing if I finish the month with a few thousand words complete.

My Nanowrimo Page
Might not work here, but I'll see if I can get it going before November...

Email ThisBlogThis!Share to TwitterShare to FacebookShare to Pinterest
Tags: Nanowrimo

For the directed study I'm taking, one assignment was to model, rig, and animate an inanimate object.
Here's my victorian lamppost. Hopping along. Very unconvincingly.

Not that proud of it, but I guess it sorta worked out. The main thing I figured out was that if you don't rig something exactly right and understand everything about the rig, the animation will be a pain in the lower quarters. It was. And I still have to figure out the rigging process. I know, I rigged Delgo so much time ago, but I only really absorbed some of the process, and not everything applies. E.g. delgo was a single mesh, whereas this post is made up of components, but some of the components need to be skinned (deform with joints inside). Therefore, I didn't know how to parent parts of it, and the whole thing got a little wonky with translation. But, I brute forced it into a hop and hop, and still learned some, though I need to sit down and spend a great deal more time on tutorials for both rigging and animating. I don't know if I've said this before, but I'm not that good at animation, and I don't enjoy it as much as modelling. I guess once I've learned a lot more, it should be more fun, so we'll see.

In other news, I'm really wanting to try my hand at NaNoWriMo, which is a challenge to write a 50K word novella-novel during the month of November. I have a very bad habit of not finishing projects, but maybe, just maybe, this one will stick. All I have to do is write 1-2 thousand words an evening. It'll be a breeze. I really want to write a good book someday, so this will be a way to write a sucky book now. I'm sure it'll be fun while it lasts, and even if I only get to 10 thousand words, I'll have learnt a book-load (haha, I was gonna say boatload) about writing. So this is all to say, I probably won't post a lot in November. I need to take time to do some drawing too, so maybe that can be a December project, and I'll go super intensive on the Maya starting in January. Man, if I think about how far I've come since March... really far. But could be further.

Well, the video is almost done uploading, so wish me luck with the writing and I hope I'll have something to show for it by my birthday :)
I probably won't be able to show it to anybody cause it will be frightfully embarrassing. Hmm, still uploading. What else can I say. Have a safe and happy Halloween! I've been working through a dynamics training kit. Very cool and fun. I learnt how to make a soft body (which is like a piece of cloth for example without using nCloth) and how to bake simulations and create snowfall. I'll maybe post some screenshots of that as I go, depending on how interesting they are.

Okay, that's enough from me for now.
Later,
Stuart
No comments:

Finally some new renders!
Did this pair for my directed study, continuing with the harp model. 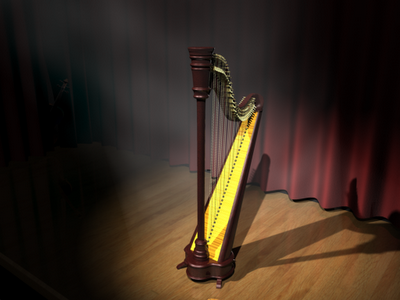 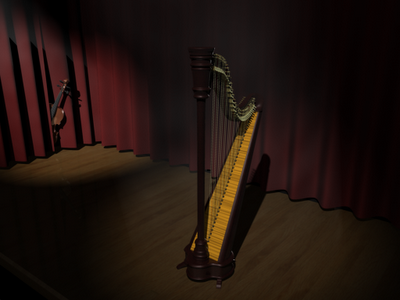 Click 'em for larger view!
The violin was done by another guy in the directed study group, and I think these two "characters" look great together. The assignment was to use exactly the same models and camera angle, changing only the lighting to put the focus on different things. I guess it's sort of a cop out to point a spotlight on two different things, but I did change quite a bit more than that. I'll give you a lighting breakdown, just for your interest?
Scene 1: Two spot lights both focussed on the harp, with fog (containing 3d volume noise) and raytracing shadows (raytracing shadows don't work as well as depth map shadows for blocking light fog, but I couldn't get the dmap shadows working properly, i.e. strong enough)
Directional fill light to lighten up the places outside the spotlight
Point light with negative intensity to blacken out the corner where the violin is a bit more.
Directional light behind the harp pointing at the camera as a "rim light" to give the main character a bit more shape and "kick".
Scene 2: Reduced intensity on right spot light
Point left spot light at violin
Remove light sucking point light
Give violin a rim light too
Realize that the renders look horribly different on each of my two monitors... really going to have to figure that out; so, sorry if the scenes don't look as good as they should... (haha, now you think they're supposed to be awesome even if they look like garbage to you...)

Oh yeah, and of the whole scene, I think I'm happiest with the curtains. I added a bit of bump noise to give it a velvety look. I think it sorta worked.
What do you think I should fix? Or your fav bit? And I won't be offended if you say the violin, cause it is pretty sweet.

Let there be light

Just finished a DT training course. Actually two. The first was a visual guide to animation, which introduced a bunch of animation topics in a basic, graphic, non-software specific manner. Pretty neat, but pretty general and not too much I didn't already have an idea about. The recent one was Introduction to Lighting, and that one went into a lot more depth and I took a bunch of notes (they have a note taking tool built into the video streaming, kinda like highlighting bits, very handy). I'm not going to post any pics, cause I don't really feel that the result of the tutorial was my own work (less so than the pod, I mean). But I should post a render or two of the scene I need to create involving the harp. Should be up tomorrow or the day after.
Later,
Stuart

PS Just realized that was a pretty uninformative and uninteresting post, but I haven't posted in a while, so in case you were wondering what I was doing...
No comments:

Working on texturing the harp right now, and I was having some problems with getting the UV mapping to work correctly, so I decided to play around with some lighting and rendering techniques. Not very complicated stuff, but mental ray makes it like... wow! Anyway, I can't really take credit for this image, but I'm pretty happy with it nonetheless. I'm sure there's a bunch of stuff wrong with the image that I should work on, like getting the composition and light directions better, but I think I need to get back to the texturing. It was fun while it lasted. Next week I'll have some better renders I'm sure. 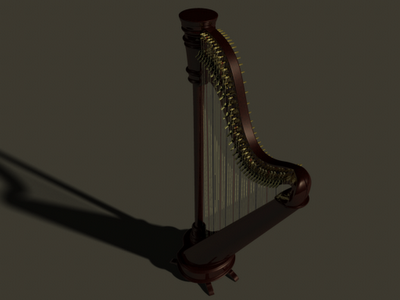