Why I Buy Compact Discs

Since I'm writing on a blog, I'm allowed to occasionally spew forth a diatribe, yes? Okay, "here goes" -Moshi
Diatribe in a good way.

1) Paying for music is generally a good way to go, since unless you're friends with all artists, you probably can't get it all legally and free. So with that decisively cleared up, let's go to point 2.

2) Predicated on the assumption that I'm willing and wanting to have some of my money go to artists. In that sense, CDs aren't a bad way to go, based on this cool infographic (Artist_earnings). In fact, you could argue this a lot, but given a good contract or a self-published album, CDs are the best way to ensure a good proportion of your dollar is getting to the artist. This is particularly true of services like spotify, which I'm not against. In fact I like to discover new artists using things like Slacker Radio and Grooveshark, so if I feel like I want to hear more than a couple of an artist's songs, I'll be much more likely to shell out and get the whole album.

3) So, getting to the more tightly contested debate between buying a digital and a physical album, I'll start with the "eco" argument. "People" say that it's less eco-friendly to buy physical discs... all that plastic and garbage. Maybe so, but if you look at what it is, mostly cardboard and paper with a disc (albeit made of who knows what) it's a lot less material than a box of cereal, for goodness sake. If you recycle your yoghurt containers, I think you can feel guilt-free about having a few ounces of paper fibre weighing down your shelf. I mean, it's not like it will end up in the landfill immediately. I'll walk home from the mall with my CDs and feel good about my carbon footprint thanks (with respect to music and vehicle use, at least).

4) Okay, well digital albums are cheaper. Maybe. So I paid $15 instead of $10 for a couple CDs, but most reasonably new albums go to 2 for $20, so unless you're looking for something more obscure, it's almost comparable.

5) Speaking of obscure, the internet is pretty good, but sometimes you can't find your favorite local band anywhere except at your local music store. Which is cool too.


6) Now we get to some of the stronger points, in my opinion. I bought a few albums a couple years ago on iTunes. Since then I've reinstalled OSes at least three times and bought a new computer. Where's my music? Not sure. I backed up my purchases a while back, so I'm sure they're on a CD (!!) or DVD somewhere, but I haven't got around to trying to get them back. And if I did, what happens to my current iTunes library. Not sure. Anyway, I'm sure that's just laziness on my part. If I really wanted those albums, I'd be able to reclaim them(?). Well, one thing's for sure. Those CDs won't go anywhere. I'll be able to access them with ease for the next fifty years. **cough** What if you have a fire or get robbed **cough** Ha, I've got them all ripped lossless, backed up locally and off-site. I'm not stupid.

7) Speaking of lossless, I don't know of anywhere you can get the same quality for a digital download. I happen to like good quality sound, and mp3's and AAC just won't cut it. Snob.

8) Oh yeah, and the inserts and album art... I just flipped through a new album insert that was covered in scribbled bandnames and random artwork (Sweet Thing). It's great. No, I don't look at them that often, but there's something nice about pulling out an old CD and looking fondly at the glossy cover. Sentimental fool.

9) When's the last time you loaned out your iPod or computer? Or burned a friend a full album to borrow (let's remember copyright here). Whereas with... you guessed it.... CDs, a friend or sibling can grab a half-dozen CDs off your shelf for a few weeks no problem. Share the love.

10) And, look at what's happening to vinyl these days. A revival is what. Your kids are going to be much more interested going through your CD collection than browsing your Personal Computer that's still running a Microsoft Operating System (yes, they both sound old). They might even be worth something someday, if you don't let them get too scratched.

11) I've been in a few cars recently, and I don't think there's been wireless digital music transfer or iPod connectivity in practically any that I've been in. So that limits you to what, CDs and FM radio? Cool.

So there you go. Quality, longetivy, aesthetics, versatility, money_towards_artists_you_choose_which_lets_them_make_more_music_ativity... and, okay I'm done.

Hope you have a good week. I'm still working through my Africa photos, doing edits in Lightroom, so I might post up a couple more photos in the near future.

Email ThisBlogThis!Share to TwitterShare to FacebookShare to Pinterest
Tags: Rant

Walking into the storm

I know this is supposed to be a maya blog, but I figure it might be nice to have photos posted every now and again while I work on tutorials. I did a chapter out of my Maya Visual Effects book all on creative ways of using ramp textures (essentially gradients) which was pretty fun. But I don't really feel like posting someone else's work, so here's a photo I took in Uganda instead. 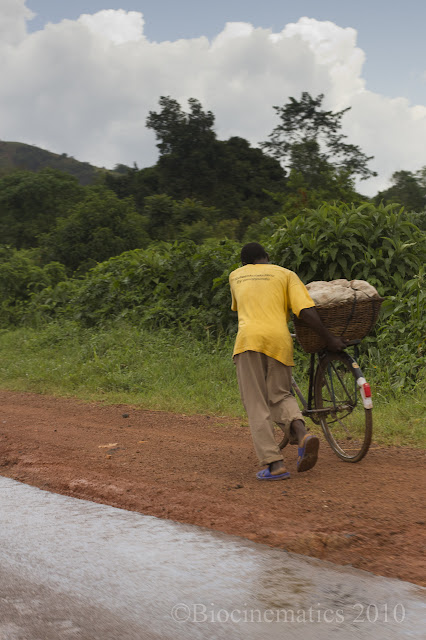 You see a whole ton of people walking/riding their bicycles along the highway with loads of various sizes and types. This man is walking into a pretty heavy rainstorm, or maybe it had just passed (considering the ground is wet) but either way, in Uganda, when it rains, it really rains. But it also doesn't last too long either. There's a life lesson in there somewhere.

In other news, giving up watching movies, TV, and playing video games for Lent, so I'll be sure to be doing a lot more productive stuff. We'll see if that carries through to the blog :)
Also, really looking forward to getting the new Mother Mother album, Eureka this week. And the new Rise Against one too.

I posted a finished render of this model on the Simply Maya challenge thread, but I never got around to posting a render here, so here it is. I might try and render out a turntable and upload it to Vimeo too. 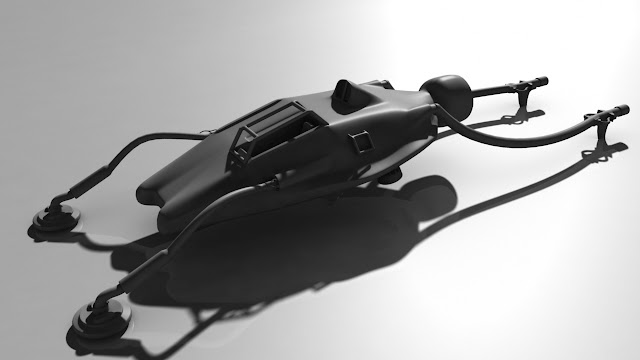 I'm going to start learning Maya from a couple of books I have, so I might not be posting as frequently with my own projects, but hopefully I'll have WIPs and photos and sketches every now and again.