So despite the fact that I've got 5 hours of dissection tomorrow, I figured I could take a bit of time this evening and try to get a bit more familiar with the sculptris program. I have to say that it's a very fun program and not very hard to get to grips with. If you've never done any 3D computer stuff, I might dare say this may be the program to start off with. It's got about 9 tools, and a handful of options (brush size, strength) and that's about all you have to deal with. This was my first attempt in an hour or two. You might recognize it as the scout from Team Fortress 2. 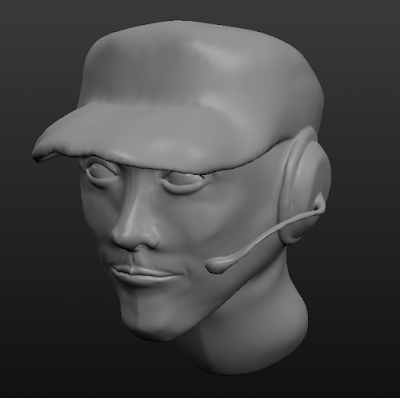 It's also got a painting module, but I haven't given that a try yet. Maybe tomorrow after I've had my first go at real dissection (yikes...).

I also got 25 likes on facebook, which means that I can reserve the URL and you can now find biocinematics at facebook.com/biocinematics.

This first week has been pretty tiring so far and only ~half done. Phew.

Email ThisBlogThis!Share to TwitterShare to FacebookShare to Pinterest
Tags: Sculpting

First day of classes done! Five hours of intensive gross anatomy, and I can't really remember terribly much of it at the moment (I had to look up a long name because I couldn't think of any off the top of my head). Actually, I learned a pile today, it'll just take a bit of refreshing to bring it back to the surface. Fairly overwhelming.

But the weekend was fun. Went to a Blue Jays game, which was fun (they lost 12-zip and there was lots of humorous heckling). We also took a trip up the CN tower (until 2009, the tallest freestanding structure in the world... now fifth), and checked out our apartment from the top. There it is! 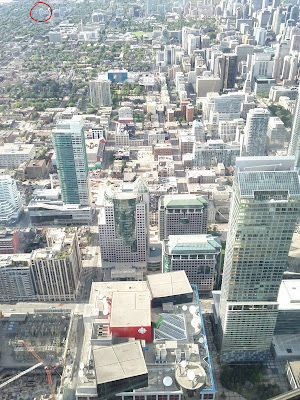 And what else... I've been playing around with Sculptris too, which is a simpler type version of zbrush or mudbox (bought by pixologic who make zbrush). I like it a lot better than either z or mudbox so far, so I think I'll mess around and see what I can do with it. Hopefully my next post will include some CG, since it's been quite a while. I think this anatomy will be quite the workload, but I'm still clinging to the hope that I'll be able to do some CG concurrently.

Thanks for reading.
Later,
Stuart
No comments:

Email ThisBlogThis!Share to TwitterShare to FacebookShare to Pinterest
Tags: Misc

Here I am writing from my computer in our new apartment in Toronto...
I got my internets installed yesterday morning, during which the technician spent over an hour going through the [insert ISP here]'s customer service departments over the phone, trying to get a modem authorized for me. At least employee's aren't exempt from the kind of pain those customer service rep's put people through. Anyway, it seems to be working okay right now.

But backing up, a lot's happened in the past several weeks. I was working on that blood vessel animation, and then I realized that I was going to have to pack up my computer until I could get I moved to Toronto, so that's been on hold for obvious reasons. So, I carefully unplugged and labelled all my cables (quick moving tip: you may know to which device all your power cables and other connectors belong to, but it makes things so much faster and easier to put a twist tie around the neatly coiled cable and a simple masking tape label; you're welcome) and spent a long time putting bubble wrap, packing tape, pillows, underwear, and other cushioning materials around my precious computer and monitors. Then I labeled the box FRAGILE all over and the movers came and put everything in a big truck.

So after a few frantic days of packing and cleaning, I got to take some great holiday time at the family cabin. It's the kind of place where there's enough amenities to be really comfortable (running water; toilets that takes your waste a good distance away; grandmothers that really know how to make good food, and nearby concessions that sell nerds and ring pops) but you're far enough away from civilization that you can't hear highways, you can stumble across fantastical toxic mushrooms that no one has either eaten or stepped on yet, and you can go for a swim within 3 minutes of deciding that you want one. Previous to this past visit, I hadn't been there for about 6 years, so it was great to have that time.

In the back of my mind I've always been thinking about preparing more for school, and I've done a number of sketches, mostly focusing on the human figure since that's still somewhat of a weak point for me, and I'm anticipating being required to do some of that this fall (maybe?). I won't post any of those sketches right now, maybe in the future. I've been sort of working through "The Drawing Book" by somebody Blake, which I've found to be really helpful and interesting. There's good instruction and examples, especially for portraiture and figure drawing.

But back to "what I did this summer" (or whatever this post is titled), I travelled back to Victoria and spent some time tying up loose ends and "helping" my wife successfully defend her Master's Thesis in Genetics on Recombinant Expression of N-acetylglucosaminidase (no I didn't have to look that up, yes I paid attention to what she was working on, no I'm not sure if I spelled it right). Yay!

And then we flew to Toronto! Yay! And got the keys to our apartment! Yay! And then we realized that it was really not clean! Yay! So we've spent the last week cleaning first and unpacking second and finding new and used furniture third (but all intermingled too), including a 90 pound desk that we carried home on the subway. Yeah, that was fun... not really. But it's a pretty nice desk, large enough for both my monitors and my printer and scanner and DAC and modem/router and even a shelf above for my speakers and reference books. I might post a picture of my setup on facebook. Whee. Oh yeah, and the other fun thing we did today was dumpster dive for bookshelves. Not joking.

Let me relay the story. So my wife and I found a nice bookshelf on some website that does used items, craigslist or one of those, and it was just a block and a half away and the dimensions were just right. So we went over to the listed second story apartment, thinking we could carry it home together. It turned out to be nice and tall and what we were looking for, but it was really heavy. We paid for it, and decided to carry the removable shelves down to the main floor and come back up for the main shelving unit. I put them in between the double set of doors, inside the building, out of sight of the street, but not behind the locking doors so we could get them without calling up again in case we let ourselves get locked out. Sounds good, right? I went back up, and we came down with the shelving unit not more than two minutes later. The shelves were gone. It was a stomach sinking moment. I went outside and looked left,  right, and even in one of the garbage units in front of the building for the vanished shelves. I couldn't see any culprits. Who steals particle board shelves? At this point, my wife noticed that a stack of mail that was left beside the apartment mailboxes was also gone. Someone stole mail and our shelves? It seemed weird. After some phoning about, we managed to find out that the superintendent of the building had thrown the shelves into the third garbage bin in front of the building. Again, the shelves were there for less than three minutes max. Anyway, I located the shelves, did some quick risk analysis, and fished them out. They look pretty nice sitting over there in the corner, but after two or three chemical washes and a rinse or two, I'll still understand if you don't want to borrow any books from me. I won't elaborate on the other contents of the garbage, so I'll end the story here. I hope our misfortune has afforded you at least some entertainment.

Let's see... oh of course. Once I connected panel 6 to mid-support 13 using screws 57 and 48, I started getting my computer system set up on my nice new desk (yes, new, straight from a factory in south-east asia). The labeled cables were very helpful, and I manged to get everything together without too much trouble (except I still can't find the wireless dongle for my mouse, so I'm stuck using the mouse that came with my tablet for now... where can it have gone?). Not too much trouble that is, (using another exception because there were in fact multiple exceptions to the "not too much trouble") except for my rather expensive, and rather necessary for much work, much communication, and other entertainment and hobby type things I plan on doing. Wait, that wasn't a complete sentence. Except for my COMPUTER!! The one that was labeled fragile? The movers did this to the box: 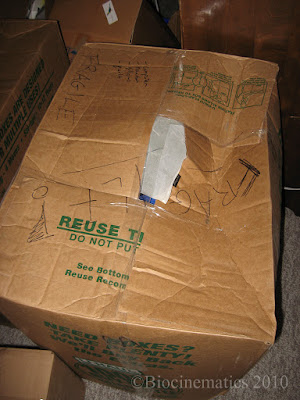 And inside the box, they managed to do this to the case: 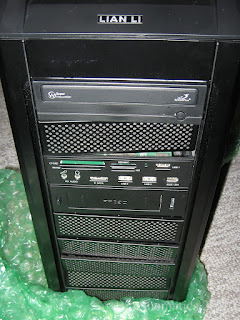 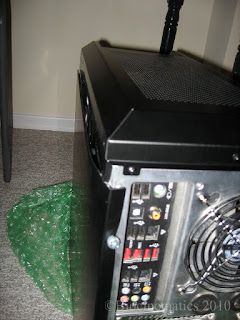 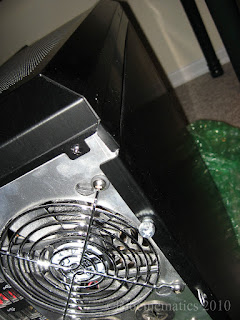 Keep in mind, this was surrounded by the inch-sized-bubble bubble wrap and pillows on either side, and other quilts and clothes and oh yeah underwear. This case was made by Lian Li, which, if you'll care to do a small amount of research and find out, build somewhat high-end, rather sturdy construction cases. In truth, I'm not all that concerned about the case, but the only I could think that would warp the whole case and knock all the front covers askew is a massive shock, which I don't need to tell you wouldn't bode well for the internals.

Did I back up my computer before the move? Yeah, of course, and I left the backup drive in Victoria. Oh no, wait, it's somehow appeared in another box. Hmmm... I really hope that box didn't get dropped off the back of the truck too (just guessing here). So, with a small amount of trepidation, I booted up my compy... and everything went as hoped! Apparently the Lian Li cases have rubber grommets that hold the hard drives for anti-vibration, so maybe that helped with whatever shocks were subjected to it. All's well that ends well, but can I say, if you want to move across canada, do not use Across Canada Van Lines Inc. They were terrible in basically every single interaction we had with them (and there were a lot of phone calls and emails). We're still trying to file a claim for damaged furniture and also get a receipt for what we paid.

Anyway, that's probably enough about me and my moving escapades.
I've got orientation on Thursday; very much looking forward to it. I'll post about how that goes.