Stop harpin' on the new computer!

Catchy title, eh? Ok, I guess not. Well, it's finally arrived. I've planning on buying it for almost a year, and now it's arrived, assembled, loaded up, installed, booted, and all that other stuff that computer's need to do before the real fun begins. Love the SSD, booting and loading apps is super fast. Maya (after it's been cached) starts in 8 seconds, which doesn't sound like much, but it's the difference between "yeah, I'll work on maya for a bit right now" and "meh... when I have time". Seriously. Windows 7 is installed, and... (sorry Mac and Linux fanboys) it rocks. I skipped Vista for obvious reasons, so it's all fresh and sparkly and snappy (boy is it snappy) and effectsy (which I typically don't like *cough* bouncing dock *cough*) but they're alright. I can tell the system noises will get tiring though. And... it's still windows, so far from perfection, but hey, it runs (most of) my software. I'll throw some Ubuntu on later as a secondary OS (yeah, sorry again Linux) and maybe a hackintosh someday??? (Keep the dream alive, fanboys!)

But I digress... I haven't really stressed the computer yet, but the initial playing around has been pretty sweet. Played Batman: Arkam Asylum for a little bit, great graphics and framerates (55+ fps! though w/o aa) and maya runs smooth as a rabbit's bum. (Deviated from the typical simile for the sensitive readers out there...) Well now, so I modelled a harp for the directed study I'm taking at UVic, and relatively pleased with the outcome. I think it's probably the best modelling I've done to date, though you can let me know if it still sucks. So there you go, the title made some sense. Blogalogalog. 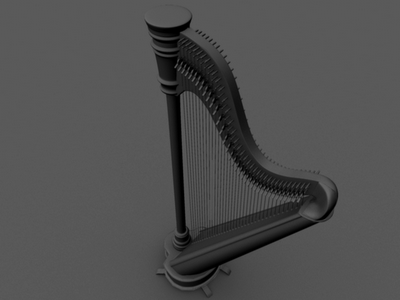 And here's a WIP wireframe of some lever details: 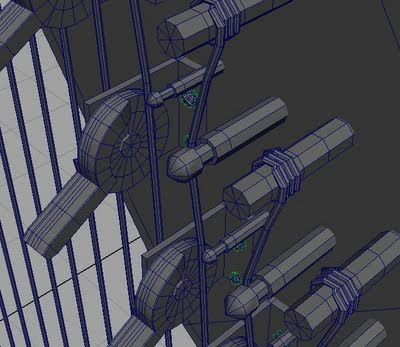 That's my wife's harp in case you were wondering. I don't play. But it is a beautiful instrument. I'll be texturing it next, so stay tuned! (Despite the fact that this website doesn't broadcast on a specific frequency... or does it?!)