I've made various promises to share some recent work, and it's high time I follow-up on that. Over the past few years, I've done a number of freelance animation and illustration jobs, mainly for Professor David Leigh, who runs a Chemistry laboratory at the University of Manchester.

On several occasions I've been privileged to be able to work alongside this research group, who perform intriguing research in the field of molecular robots and molecular knots (What are those? See below for some more explanation). My contributions have been primarily visual analogies of the science behind their work.

I designed editorial illustrations to generate interest in the research and for use as cover images of the journals in which the research is published. I shared one example in my previous post and here's another example on the subject of molecular knots:

What's a molecular knot? And why tie one? It's essentially a looped molecule that isn't just a loop. So… it loops through itself at least a few times. There's an interesting (to me) mathematical field of knots, where different kinds of knots are classified based on numbers of crossings–and I probably shouldn't get too far down this rabbit hole. So why create a molecular knot? In my mind, it's about finding novel ways of chemically synthesizing new structures, which could be useful in materials science, manufacturing, and nanotechnology.

It seemed logical to depict this particular molecule as a knotted rope, and I went with a nautical theme, including a central chloride ion represented as a Japanese glass fishing float. To get the right feeling of a heavy, thick rope, I spent a long time working with displacement maps to get the right texture, and I scattered loose hairs with a MASH network. 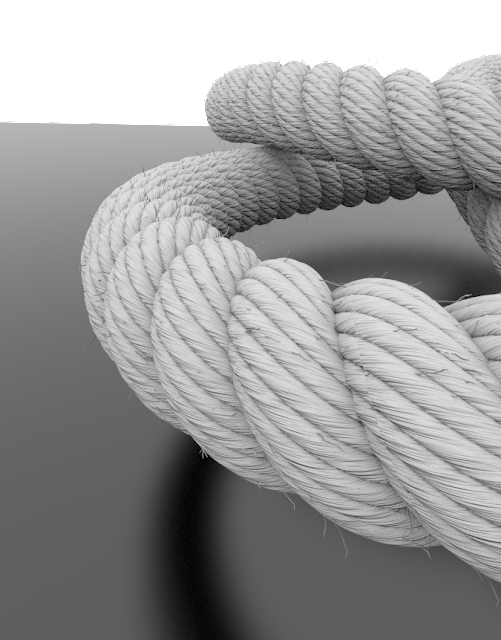 The illustration didn't end up on the cover of Science, sadly (these choices are made by the publisher for various reasons), but it did show up on various sites, from Forbes to NPR and was an "Image of the Day" for The Scientist and apparently appears in the 2019 Guinness Book of World Records, for the entry "Tightest knotted structure".

Following the creation of an illustration, I was often tasked with developing short animations to be used in presentations of the research. This knot synthesis animation was a huge technical challenge, but a rewarding project.

If I remember correctly, I ended up using three or four different rope rigging setups to create the necessary behaviours as the lengths of rope assembled themselves.

One of the hardest parts, as you might imagine, was the binding action and getting the rope "tendrils" to wrap around each other; I had to carefully measure how far each rope-end was from its neighbours to get the action correct. 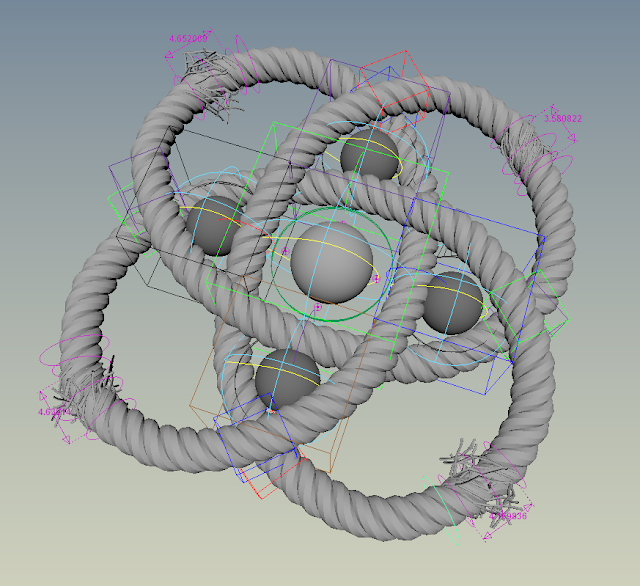 In addition to the "knot" work, I also ended up doing a few "molecular robot" pieces. One robot that the lab developed was capable of moving a cargo molecule from one binding site to another, controlled purely by the addition of different chemicals, such as certain acids and bases.

But what does this robot actually look like? Well, we can't observe molecules of this size directly, but here's the chemical structure, showing all the atoms that comprise it.

The lab developed this concept further and designed a programmable molecular robot with a similar structure to the one above. This new molecule can synthesize different stereoisomers, driven once again by different chemical reagents. What are stereoisomers? They are sets of related molecules that differ only in the 3D orientation of atoms. So think of one molecule having an atom sticking out the front, and its "stereoisomer" partner has the corresponding atom sticking out the back.

I had an early concept for a delivery system for the atoms (shown as colored balls in the video), which I think is kind of fun, but we ended up with a simpler concept where the atoms just fly to the tables.

I also had fun designing the peripheral apparatuses (apparati?) to fit with the mechanical theme:

I will conclude this lengthy post here (granted much has happened in the last couple years). Thanks for reading all the way down here. Next week I'll share some details about my new workstation, which may be of interest to some?

Finally, an optional "Call to Action": If you'd like to help me out tremendously, subscribing to my Biocinematics channel and liking the most recent two videos (if indeed that aligns with your feelings towards them) would be massively appreciated. If you have already have a Google account or Gmail account, you don't need to sign up for anything new or take any extra steps. If you'd like to go the extra mile, you could share this YouTube channel with friends or family who might be interested in educational science-y stuff.

Thanks again for reading and supporting me,