One of the things that must be done every now and again is diving into the guts of your computer to install a hard drive, change your graphics card, add some RAM, etc.
Of these, often the easiest is swapping out a hard drive. The front of the computer that holds the hard drive is usually quite accessible, the cables are obvious, and the parts are not as fragile. With this in mind, along with the generally accepted notion that Lian Li makes some of the best computer cases on the planet, I was optimistic when I decided to install another HDD into my beloved computer. In case you also have a Lian Li PC-P50 Black Aluminum ATX Mid Tower Case and want to attempt this, here is the step-by-step procedure.
1) Have on hand i) screwdrivers ii) alan wrench iii) scissors iv) vacuum v) motherboard manual vi) hard drive! vii) flashlight viii) spare HDD screws ix) spare SATA cable x) helper if available (to hold flashlight and hand parts)
2) Unscrew (thumb screws, easy) the two screws in the back of the case to pull off the side panel
3) Give the majorly dusty parts a quick vacuum, fans and vents, top of PSU
4) Check the hard drive mounts to assess the situation. There appears to be a cage of sorts within the bays that holds 3 hard drives. Two slots are full with SSD and HDD. The HDD must be installed within the cage, which requires the cage to be removed from the case. This is not the most elegant setup. However, we shall press on.
5) Remove the top of the case, pops off easy enough
6) Remove the front bevel of the case, also pops off 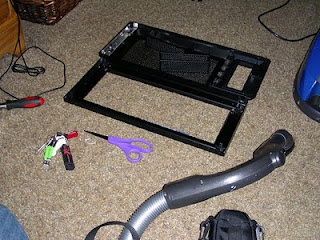 7) Remove the right side of the case (two more thumbscrews)
8) After examining both sides, it seems possible that the whole cage might slide out the front of the case if four key screws are removed. These also are thumbscrews, so it seems likely these are the main points of attack. Remove these screws. 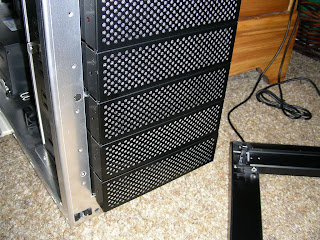 9) Remove three bottom vents in the front of the case, squeeze the sides and pull out to remove. (You can see them in the first image sitting on the top panel)
10) Give the cage a jiggle. It seems that it is now free of screws so it can be pulled it out.
11) Remove the sata cables from the two existing hard drives (not trivial, especially the 90 degree kind which allows no grip due to the power cable directly adjacent)
12) Remove the power cables from the hard drives (also not trivial, very tight, no room to maneuver, fragile components in the vicinity, very dark - try to aim flashlight by balancing on a nearby peripheral such as a scanner)
13) Give the cage a tug. Seems to be sliding free. Wait! Not quite. There is a power cable attached to the fan at the front of the cage. It is impossible to see how it is attached; reaching behind the cage and tugging cables does not work. Trace the thin wires up through the case. They are attached to another molex power cable. Detach at this point in the hope that this is not attached to any other components (not trivial, very tight and tucked behind zap-strapped group of cables). It becomes apparent that the wires are included in the zap-strapped group of power and sata cables.
15) Use scissors to snip the zap-strap (take care not to cut the cables) and pull the power wire down to the bottom of the case.
16) Pull the cage. At last it slides free. 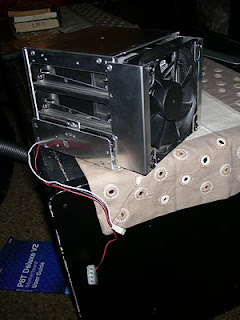 17) Since the fan prevents the hard drives from sliding out the other direction, it is necessary to have the entire cage outside the case. Note that unscrewing the fan will not allow the hard drives to be exchanged, as will be seen shortly. Examine the cage to determine how the hard drives are mounted. Screws are puzzlingly disassociated from the existing hard drives. Tilting cage around provides little insight. Jiggling a hard drive provides the answer, they are connected merely through rubber grommets pinching thin metal rails. This provides significant noise reduction by not having metal on metal. Pull out one of the hard drive mounts to examine the method. 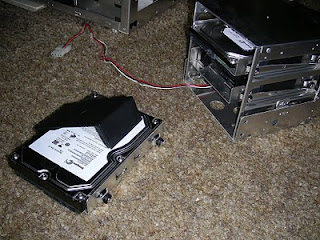 18) Hard drives are mounted with a screw on either side and a black plastic cover that snaps over the top of the drive. Unsure of purpose. Rearrange hard drive mounts so that SSD is on top. This allows better access to reconnect cables (Thinking ahead gives plenty of benefit in these situations, except in this case where it would have been better to have the SSD at the bottom... see below). 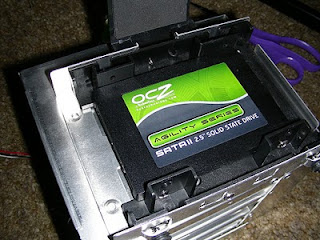 19) Place HDD in third mount, screw in two screws (rummage through spare parts bin if you don't have any on hand)
20) Snap cover over top. The HDD to be installed is a half-height variety, so the cover is useless and doesn't hold HDD in place at all, however screws seem to suffice.
21) Line up rubber grommets and slide HDD mounts back into cage.
22) Slide cage back into front of case, making sure to have fan power wires inserted first. 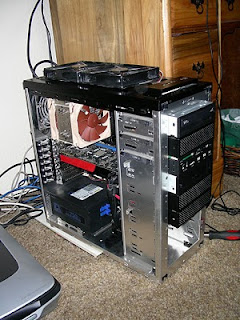 23) Connect up fan power cable with the molex. No zap-straps on hand, so the wires will have to dangle free. Does not appear to have an effect on air-flow, and increases ability to work inside case.
24) Check sata headers on your motherboard. Consult motherboard manual to determine how many are supposed to be on the board. It is quite likely they will be all used, so examine your bays to verify the fact and then decide which to unplug. In this case, a spare eSATA port is unecessary, so the internal SATA cable is disconnected. This particular cable cannot be removed, as it is integrated into the eSATA HDD bay, so put a twist-tie around it, and tuck it out of the way.
25) Connect up the cables from furthest in to closest to you. This is important for somewhat easier access. Start by connecting the spare sata cable to the motherboard header. Tricky in dim light. 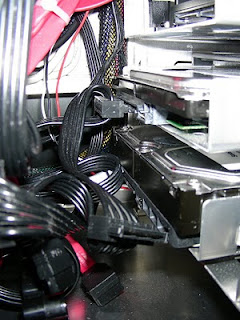 26) Connect the power cables to the hard drives, bottom to top. Snip another zap-strap to free up the power cable and determine how the power connectors line up to the hard drives. Start at the bottom with the one end of the cable. The second one gets an interior connector. The top is the SSD, where the connectors are recessed (difficult to access). Realize the next interior connector does not have room to reach the recessed connector. Unplug the power cables and start over.
27) Use the end connector for SSD, start with the first interior connector at the bottom. Make sure you are not trying to plug it in upside down, as this is the natural orientation if the end connector is to be connected at the top. Connect the next connector to the middle HDD, leaving space to loop the power cable back from the bottom directly to the top so the end connector can be connected to the SSD.
28) So much for the power cables. Connect up the three SATA cables to the hard drives. 90 degree sata connectors are more difficult, but make sure to use them on the HDDs, as they won't fit in the SSD. Use the flat sata for the SSD.
29) Take a break. Wipe sweat.
30) If you haven't already, replace the three vent pieces over the fan. They should snap into place. If they go too far in, use a very small alan wrench to pull them back out. Pushing the cage further into the case may be necessary if they don't fit.
31) Replace the thumbscrews on the cage, securing it in place, just behind the vents.
32) Replace front beveled panel of case
33) Replace top panel of case, always vacuuming where necessary 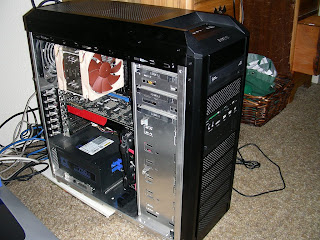 34) Replace right and left sides of case (four thumbscrews)
35) Reattach main power cable, power on
36) Check that all drives are recognized
37) Put away tools, garbage, manuals, parts, vacuum, etc.
38) Give yourself a pat on the back. You've survived the Lian Li hard drive cage match!

This should take you a little less than an hour to accomplish, or less now that the hang-ups and requirements have been so clearly described in the guide above.

May my hard drives live forever! (For I am loathe to ever replace them).

Email ThisBlogThis!Share to TwitterShare to FacebookShare to Pinterest
Tags: Computer